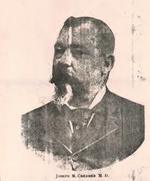 Dr. Joseph Marie Creamer, Jr. was born in 1852 in the United States. He was the son of Joseph Creamer, originally from Nova Scotia, and Ellen Tuttle. The 1870 US Census, has Joseph living with his parents in Brooklyn, NY. He is listed with his five younger brothers: Alexander, Alphonso, Hubert, Francis, Charles, and one younger sister, Mary. Also living with the family, is his maternal grandparents, Alexander and Mary Tuttle, and two female Irish servants, Mary Burns and Mary Gorman. However, according to later censuses, at least three more siblings were born, Theodore, Harry (also a doctor), and Pauline Gertrude.

According to his obituary, in 1900, Joseph began his education at the Niagara Falls Seminary. In 1872, he graduated from the the University of New York Medical Department. At the time of his graduation, he was not old enough to officially practise medicine and “his diploma was withheld until the following year, when he began the practice of his profession".

They had three children, Joseph (b. 21 September 1876), Francis Alexander (b. 27 January 1880), both born in Charlottetown, and Carrie (of whom very little is known apart from her being listed in Joseph's obituary).

At some point Joseph also was a physician in Saint John, New Brunswick for “many years", according to a notice in the Saint John Daily Sun published on 19 November 1892. The dates would be sometime between 1880-1888.

Sometime before October 1888, the family moved to Brooklyn, New York, where Joseph worked as a physician and surgeon. The Wednesday, October 10th 1888 edition of The Brooklyn Daily Eagle, announced the following:

A Bogus Check. Presented in Payment of an Alleged Doctor's Bill. Dr. Jospeh M. Creamer, Jr., had not long departed from his home this morning in his carriage to attend to his professional duties when a respectable looking man rang the door bell and inquired of Mrs. Creamer if the doctor was at home. When told that he was not, the man expressed disappointment and explained that he had come to pay a bill of $15 and it would put him to some inconvenience to call again. At his suggestion Mrs. Creamer accepted a check on the Commercial National Bank for $25, dated October 8 and made payable to the bearer, returning the stranger $10 change. The check was signed by Charles E. Endicott. When the doctor returned to his home he realized at once that he had been swindled out of $10. The check is now at the Fifth Precinct Station.

Joseph and Catherine's youngest son, Joseph III, followed in his father's footsteps and became a doctor; including a stint as the New York Giant's physician.

According to his obituary, posted in the The Brooklyn Daily Eagle on 23 February 1900:

Dr. Joseph M. Creamer became noted both as a physician and a surgeon and was the first police surgeon appointed in the city. For a number of years he served as autopsy surgeon to the Eastern District Coroner and for many other years he was County physician. When Dr. Creamer was elected Coroner of the Eastern District, in 1892, he had one of the largest private practices in Brooklyn.

UPEI's Provenance collection includes the book Lectures and Essays on Irish and other Subjects by Henry Giles. The inscription in this book includes a stamp with the name Doctor J. Creamer Jr. and below that, written in pencil, is:

John Caven became a Professor at Prince of Wales College in Charlottetown, PE in 1879, two years after receiving this book from his friend Joseph Creamer.