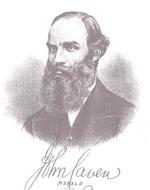 John Caven was born on 6 March 1826 in Urr, Kirkcudbrightshire, Scotland.

In the Scottish Census of 1861, John, listed as a teacher of elementary school, was living with his wife, Catherine, and their two young children (Catherine & William W.) at 32, 34, 36 Dundas Street in Edinburgh, Scotland. Also living with the family, was a young Irish domestic servant, Bridget Duffy, and two lodgers, John Corballie (a student of medicine), and Angelo Curris (an Italian musician).

In 1869, John and his young family immigrated to Canada.

John started his Canadian career in journalism, working at the Charlottetown Herald but eventually returned to teaching.

He was the President of the St. Vincent de Paul Society, a society dedicated to helping needy families. It's mission is “to Live the Gospel message by serving Christ in the poor with love, respect, justice and joy". John was also locally well known as a fine vocalist, and was a regular performer with the Charlottetown Orchestral Club.

John retired in 1901, and third year student, Athol Seaman, delivered an address to Dr. John Caven which was reprinted in the Charlottetown Guardian on 21 December 1901. A portion of the address is highlighted here:

Dear Sir- We have learned with regret that you intend to sever your connection with us, that at the approaching holidays you withdraw from the teaching staff of Prince of Wales College. Twenty-one years, we are told, have you been teaching here, a period that passes understanding for most of us, so long indeed that we have learned to consider you an integral part of the institution. To think of her was to think of you. Your geniality and gentleness lighted up many a lonely moment, and lent a warmth and color to the student life. You encouraged us in our toil, but you made us to see the fuller life of social kindliness... In the memories of those who have been students, student days are the brightest. For students of Prince of Wales, in these twenty one years of associations clustering about Mr. Caven must always be of the most pleasant and agreeable kind. This feeling will follow, does follow you, as you now withdraw the arduous work of teaching, and, go where you will be pleased to believe that you are accompanied by the best wishes of your students. May you long be spared to enjoy the quiet of later life...

Dr. John Caven died on 26 August 1914, and is buried alongside his wife at the Charlottetown Roman Catholic Cemetery. Catherine had died at age 58 on 20 August 1888, and John remained a widow for twenty-six years.

John's obituary was printed in the 27 August 1914 edition of the Charlottetown Guardian:

By the death of Dr. Caven, yesterday morning, Charlottetown has lost its most highly cultured cititzen- one whose ability was proved as teacher, lecturer, editor, poet and singer. The deceased gentleman was an octogenarian. He maintained his health, strength and spirits wonderfully, until within a few weeks of his passage to the unseen world. Educated at Edinburgh and in Rome he came to P.E. Island about forty-five years ago; and was for many years engaged as a professor of literature at St. Dunstan's College and Prince of Wales College, as editor of the Charlottetown Herald and in other capacities, -in all of which his extensive knowledge and power of finished literary expression were exhibited. For many years he was leading member of the choir of St. Dunstan's Cathedral. Dr. Caven is survived by four children, two sons, William in Montreal and John at home, and two daughters, Miss Kate at home, and Mrs. Birlinguet, in Three Rivers, Quebec. All his children were with him at his death. His wife, who was Miss Katherine Rigg, of Scotland, predeceased him twenty-six years ago.

UPEI's Robertson Library Provenance Collection includes the book, Lectures and Essays on Irish and other Subjects, by Henry Giles. The inscription in this book includes a stamp with the name Doctor J. Creamer Jr. and below that, written in pencil, is:

Other John Caven books in the UPEI Provenance Collection:

de Quincey, Thomas, Confessions of an English Opium Eater. London: George Routledge and Sons, 1886. [Book includes two of John's signatures, both with the year 1898 listed below the name].

Sallustius, C. Cruspus, Opera Quae Extant. [John Caven's signature appears to be written over top of another unidentified signature. This is one of the oldest books in the UPEI Provenance Collection, published in 1786.]