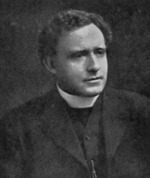 The known poet-priest from Kilkenny, Ireland, James Bernard Dollard was born in 1872 to Michael and Anastasia (Quinn) Dollard. Many researchers have indicated that his birthday falls on 30 August 1872, but according to the record, Ireland Select Births and Baptisms, 1620-1911, James was born on 20 Oct 1872 in Kilkenny. Census records suggest August, so this date of October 20th could indicate the date of his baptism and not his birth.

James studied Classics at Kilkenny College and then sailed for New Brunswick, Canada, in 1890. James’ great uncle The Right Reverend William Dollard, was the the first Bishop of the Catholic Church in New Brunswick, a likely reason for James to choose Canada.

The year after his arrival, James can be found in the 1891 Canadian Census, living in St. Stephen, New Brunswick. He was listed as a lodger along with his brother, 29 year old priest, William Dollard. James’ stay in New Brunswick may have been brief as he moved to Montreal to study at the Grand Seminary. This was followed by his attendance at Laval University, where he received the degrees of Bachelor of Theology and Bachelor of Canon Law.

In December 1896, James was ordained to the priesthood. He served as a curate in Toronto, and then became a parish priest in Uptergrove, Ontario before he became the parish priest of St. Monica's Church, in North Toronto.

James also wrote poetry, drama, and short stories, (sometimes under the pseudonym Slieve-na-Mon) including Irish Mist and Sunshine, Poems, Clontarf, and The Gaels of Moondharrig. UPEI’s Provenance Collection copy of Irish Lyrics and Ballads, written by Dollard, was published in 1917. The inscription within the book reads:

James was a member of the Poetry Society of America and the Arts and Letters Club, in Toronto. In 1916, James received the honorary degree of Litt.D from Laval University.

The Canadian Census indicates that James lived with his two older sisters, Anastasia and Nora Mary, first at 44 Broadway Street, Toronto, in 1911, and then at 1 Ward St., Toronto, in 1921. Anastasia emigrated to Canada in 1899, Nora Mary emigrated in 1908 or 1910 (discrepancy found in Census records).

The poet-priest, Father James B. Dollard, died on 28 April 1946 in Toronto, Ontario, Canada.