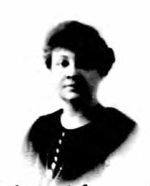 There is a picture of Katharine on her 1922 US Passport Application. Her description is listed as dark brown hair, blue eyes, round face, with fair complexion, and a large mouth. The application indicates that she planned to go to Great Britain, France, Italy, Switzerland, Belgium and Egypt for the purpose of sightseeing. She would have been fifty years old at the time.

According to the 8 Dec 1944 edition of the Princeton Alumni Weekly:

Harrison B. Smith, known to us as Jopah, died on October 18, 1942, at the age of 77. His widow survived him but a few months. They had three children, one son dying only recently in a tragic accident.

Katharine died on 4 June 1943. The tragic accident (death of son Alex) occurred on a return trip from his mother's funeral in Charleston W., VA. On Alex's way to the Salt Lake City, he stopped in Chicago. He fell off the 14th floor of the Chicagoan hotel. Cpl Smith had been in the Army a year and was en route to the Air Corps base at Salt Lake City. He left behind a widow, Margaret Shawkey Deisher.