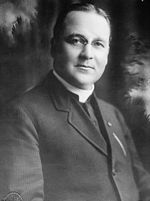 In 1891 he emigrated to the United States. He took an oath to become an American citizen on 28 July 1893, the same year he became a priest in Detroit, Michigan.

On 25 June 1924 Father Kelley was made Bishop of Oklahoma City and kept the post until he died on 1 February 1948.

Francis Clement Kelley was a generous donor to his old school, St. Dunstan’s University, (now University of Prince Edward Island) in Charlottetown. Amongst his donated books is Top o' the Mornin', now part of the UPEI Provenance Collection. The book is inscribed by the author to Father Kelley:

Conte, Louis de. Personal recollections of Joan of Arc. New York: Harper & Bros., 1896. [Written inside: "Was on my way? to Dr. Morris and met in the car two darling little girls, 3 & 5 yrs old. I gave them my pencil - or rather they took it out of my pocket and made these marks and pictures. J.HMc?].

Check, Christopher. “How to be an American Catholic: Bishop Francis Kelley.” Crisis Magazine. A Voice for the Faithful Catholic Laity (31 January 2013).

Kelley, Francis Clement. The Bishop Jots it Down: an Autobiographical Strain on Memories. New York: Harper and Brothers, 1939.