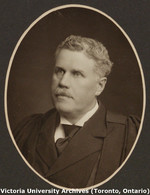 Andrew James Bell was born on 12 May 1856 to George Bell and Jessie Fleming. He had, at least, four younger siblings, Robert Fleming, George Walter, Isabella Anne, and Alexander.

In 1900, A.J. would take a cross-appointed position at the University of Toronto, as a Professor of Comparative Philology and he continued to teach there until 1922.

A.J. was married twice. First to Martha Whitwam on 9 August 1882 (who died sometime before the 1901 Census was taken), and next, to Martha Anne Sneath on 22 April 1903. The 1921 Census, shows A.J. and second wife, Martha, had one son George, born in 1921. A.J. would have been 64, and Martha 57, at the time of his birth. This seems unlikely, but at this time no other record has been found to prove or disprove young George's heritage.

Alongside academia, A.J. was well known for his extensive book collection. His personal library consisted of 30,000 volumes of books, many of them quite rare, which was bequeathed to the Victoria College Library after his death, in 1932. Ten rooms in his house, at 17 Avenue Road, Toronto, were overflowing with books. Victoria College rented the house to begin organizing the collection in May 1933. Douglas Bush, one of Bell's students, claimed in Bell's house, one had “to thread one's way dextrously over floors almost covered with tall piles of books which frequently tottered, but by a miracle never fell”.

The books were sorted and about 7,000 were set aside as exceptional and rare, including the acclaimed Erasmus Collection, now housed at the E.J. Pratt Library, Victoria University Campus, in Toronto. The other 23,000 books went into the Victoria University Library basement and remained there for thirty years. Around 1966, the books were sorted, the rare ones put aside and the remainder were sold in an auction in 1969. University of Prince Edward Island has a number of A.J.'s books, including Florence Attenborough's Cameos and other Poems which he likely received from the 1912 Sotheby auction, of Andrew Lang's book collection.

Andrew James Bell died on 24 December 1932 as a result of bronchio-pneumonia complicated by influenza. He is buried in Mount Pleasant Cemetery, Toronto, Ontario.

Subscribe to A.J. Bell RSS feed
Part of: Cameos and other poems (4 objects)
Cameos and Other Poems