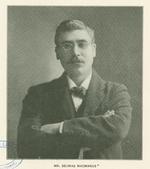 Seumas MacManus was born in Mountcharles, County Donegal, Ireland on 31 December 1868 (although his tombstone reads 1869). He was the son of Patrick MacManus and Mary Anne Molloy.

At the age of twenty he became a teacher at the Glencoagh National School and remained there for almost a decade.

He began writing in The Shamrock, a weekly story paper from Dublin. Upon hearing of better wages for story writers in America, he packed his bags and headed to the New World, steerage class. Upon arrival he was quite successful in selling stories and made enough money in less than a year to return home and buy some property he had had his eye on. This was just the beginning of his literary business partnership with America. He returned several times with new stories to sell. Eventually these magazine “stories” graduated into books and Seumas became a prolific published author.

In 1901 Seumas married fellow writer Anna Johnston (pen-name Ethna Carbery) and her death on 21 April 1902 was a terrible blow for Seumas. It took him over a decade to complete her Memoir.

Seumas was an ardent Irish nationalist. His written work focuses mainly on Irish mythology and folklore.

Seumas MacManus died in 1960 after falling from an upper story of his New York City Nursing Home. He was ninety-two. Seton Hall in New Jersey houses the MacManus Irish History and Literature Collection.

The UPEI Provenance copy of the book Top o' the Mornin' by Seumas MacManus includes the following inscription:

UPEI Provenance also houses the Seumas MacManus book A Lad of the O'Friels. On the inside cover we read: