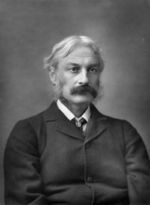 Andrew Lang was born in Selkirk, Scotland on 31 March 1844. He was the son of John Lang and Jane Plenderleath Sellar. He was the eldest child with seven younger siblings.

Andrew was recorded in the 1871 England Census, as a visitor of his maternal relatives in London, England.

On 13 April 1875, he married Leonora Blanche Alleyne, daughter of Thomas and Margaret Alleyne, in Clifton, Christchurch, Gloucestershire, England. They settled in London. However, by 1891, they moved back to Scotland, relocating to St. Andrews, Fifeshire.

Andrew became a prolific writer, focusing primarily on folklore and mythology. He is, perhaps, best known for The Blue Fairy Book which began his series of twelve different coloured Fairy Books, written, with the assistance of his wife, between 1889-1910.

J.R.R. Tolkien was a fan of the Fairy Books, saying: “None rival either the popularity, or the inclusiveness, or the general merits of the twelve books of twelve colours which we owe to Andrew Lang and to his wife".

In 1906, he was elected Fellow of the British Academy.

Andrew had many hobbies; he was an avid book collector, golfer and fisherman.

At the Tor-na-Coille Hotel, on 20 July 1912, in Banchory, Aberdeenshire, Scotland, Andrew died of heart failure. He is buried in St. Andrew's Cathederal in St. Andrews, Fifeshire, Scotland. His wife, Leonora, died on 10 July 1933, in Kensington, Middlesex, England, leaving the family fortune to her niece, Thyra Blanche Alleyne.

Andrew's library was sold through Sotheby auctions. All books sold in the auction, included a small bookplate with the following message:

UPEI's Provenance copy of Cameos and other poems, by Florence G. Attenborough, was part of Andrew Lang's book collection, sold at Sotheby's auction and possibly purchased by A.J. Bell, whose signature is also in the book. The dedication in the book reads:

To- Andrew Lang Esqr.
A tribute of admiration from the Authoress.
March 31st

Subscribe to Andrew Lang RSS feed
Part of: Cameos and other poems (4 objects)
Cameos and Other Poems