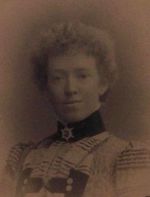 Florence Gertrude Attenborough was born in 1867, in Sevenoaks, Kent, and was the daughter of minister Amos Beardsley Attenborough and his wife Julia [maiden name unknown].

Florence had two siblings: Julia Heaton Attenborough and Arthur B. Attenborough. Julia was born in 1862 in York, and according to the Non-conformist Register, was baptized in June of that year in Hackney, Middlesex. Her death was registered in the July/Aug/Sep 1862 registry, meaning that she died before her sixth month of life. Florence never met her sister.

Florence's only other sibling, Arthur, was two years younger than her.

Florence began her writing career as a contributor to local journals, including the Royal Cornwall Gazette and the Plymouth Weekly Mercury. When she moved to London in 1886, she began to write for Cassell's Saturday Journal under the pseudonym Crystabel.

Florence's parents both died in 1898, her father before July and her mother on December 3rd, leaving her parentless at the age of 31.

In the same year of her parents death, Florence published her first book of poems, Cameos, and other Poems. She also published Alfred the Great: a drama; The Ballad of Dundee and other poems in 1902.

Although she appeared to stop publishing books of her poetry after 1902, she became a lyricist for song writers, including A Cantata or Operetta for Girls Voices: a Day in Roseland which was published in 1909.

In 1917, she married Richard H. Stodden. Some of her lyrical works cite her name as Florence Hedley-Stodden. Richard died on 25 July 1944. Florence was the recipient of his assets in Richard's will, dated 18 September 1944. Richard and Florence are buried at St. Gerrans Church graveyard in Gerrans, Cornwall. The tombstone reads:

In proud and happy memory of my dear husband Hedley Stodden, called home July 25th 1944. I shall go to him also of Florence C (Chrystabel) his widow. Re-united May 1958.

The UPEI Provenance collection, owns Florence's first book Cameos and other Poems. Inside, Florence has written the words, To Andrew Lang, Esqu. A tribute of admiration from the authoress. March 31st. Andrew Lang was an author and book collector and March 31st was his birthday. His collection was sold at a Sotheby's auction on Dec. 5 & 6, 1912. UPEI's Provenance copy of Cameos and other Poems was one of these books.

Subscribe to Florence G. Attenborough RSS feed
Part of: Cameos and other poems (4 objects)
Cameos and Other Poems