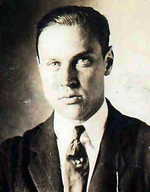 Philandre Lathrop Cable was born in Tours, France, on 5 June 1891 to Ben Taylor Cable and Maria C. Benton. He also had an older sister, Susanne. They all lived in relative comfort in Rock Island, Illinois, in a Mansion bequeathed by Philandre's grandfather. In the 1900 Census, Ben, Maria, Susanne and Philandre, enjoyed a luxurious life style, which included the services of a governess, a butler, a waiter, two servants and a coachman.

The house, known as Old Cable Mansion had three residential buildings. The grand house, and two more houses for staff. The larger of these two houses was known as “Aunt Rachel’s” house. She was a former slave whose freedom was purchased by Ben’s father, and she lived in the house well into her eighties. Philandre’s father, Ben would have known her well as a child.

Ben, was a Democrat politician and was the elected representative from Illinois between 1891–1893. He was also a chairman of the Democratic Executive Committee and a recurring delegate to various Democratic National Conventions.

Philandre’s well-to-do upbringing allowed him the luxury of the finest education. In 1913 Philandre was studying mathematics at Harvard University. After graduation, in 1914, he became an instructor at Lake Placid School and later at Emerson Institute in Washington D.C. It was around this time that Mr. Cable changes his signature from Philandre to Philander.

While teaching in Washington he signed up to join the war on his birthday in 1917. The application describes him as blue eyed, light brown hair (not bald), stout and of medium height.

At the beginning of his diplomatic career Philander married Jeanne Marie Scott in Manhattan NY. Jeanne M. Scott, who often went by the name “Mimi” was a nurse, stationed in France, during the war. She met Philander while he was working in France as a diplomat. She had been engaged to Hobey Baker, an American hockey star and fighter pilot during WWI, but the engagement was broken off at the end of the war, just before Baker died in an airplane crash.

The marriage between Philander and Mimi took place on 7 June 1919. However, it did not last and no children came as a result of the union. The 30 July 1929 edition of the Port Arthur News in Texas reported:

In 1931 Philander married Martha Linn Kelly. She enjoyed the privileges of being a diplomat’s wife. In October 1931 newspapers from across the U.S., such as the Piqua Daily Call from Ohio, reported the following society news:

Then there is another prominent American woman who knows what she wants in Paris and knows how and where to get it. She is Mrs. Philander Cable. Her husband was the first secretary of embassy before he retired. Lucile has further enhanced her natural charm and grace with an evening gown trimmed in a belt of strass [crystal] and amber glass, with a pendant of the same material from straps at the back. The material is crepe georgette struck with a velvet design in dark brown over gold lame.

Philander had no children of his own, but he did become a step-father of Martha’s two daughters, Fleury and Damaris, from a previous marriage.

After his retirement from the Foreign Service, Philander took a new career direction. In the 1940 Census, only months before his death, his occupation is listed as proprietor of a silver mine. He was living with his wife and step-daughters in Miami Township, Ohio.

Philander Lathrop Cable died on 28 September 1940. He is buried at Chippiannock Cemetery, Rock Island, Illinois. Nine months after his death, the beautiful Cable Mansion of Rock Island Illinois was torn down, after local citizens entered in and stripped it clean.