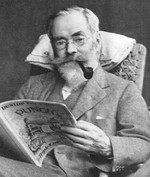 George Parker Bidder III was born on 21 May 1863 to barrister George Parker Bidder II (1836–1896) and Anna McClean (1839–1910). George’s (III) grandfather, George (I), was known as the “calculating boy”. His father found financial gain by displaying his son’s brilliance across England at fairs and exhibitions. Thanks to benefactors that took an interest in his special talents, George (I) was able to get a formal education and he became an engineer.

The importance of a good education was carried throughout the generations, for after prep school, George III studied zoology at University College London for one year and then moved to Trinity College, Cambridge.

Upon completion of his education, George took a job in Naples, Italy, at the Stazione Zoologica. He was there from 1887-1893. George’s research interests included marine biology (in particular the hydraulics of sponges), coastal erosion and behaviour of sea currents. During his time in Naples, George bought a hotel and gave it the name “Parkers”. After the bombings of WWII, the hotel was sold and rebuilt. Today, the hotel still holds the name “Parkers” and it includes a restaurant called “George’s” and a bar called “Bidder’s Bar”.

In 1893, George returned to England and began work as a visiting researcher at the Marine Biological Association Plymouth Laboratory.

On 8 June 1899, George married Marion Greenwood, a lecturer in physiology at the Balfour Laboratory, University of Cambridge from 1888-1899. Marion was one of the first female independent researchers in Cambridge and the first woman to present a paper at a Royal Society meeting.

George and Marion had two children; Caroline, born in 1900 and Anna, born in 1903. Anna followed in her father’s footsteps and became a zoologist.

George also dabbled in poetry; in the same year he was married, 1899, his book of poetry, By Southern Shore, was published. UPEI's Provenance copy of this book includes an inscription:

Arthur Willey, from his friend the author

Arthur Willey was a biologist with an interest in zoology, this certainly helped form a friendship between the two scientists.

In 1904, George oversaw an experiment to prove the East to West flow of currents in the North Sea. One thousand and twenty messages in a bottle were released. The note inside, written in English, Dutch, and German, asked finders to return the postcard within the bottle to the Marine Biological Association in Plymouth, England. They were promised a shilling as a reward for the return of the postcard.

In April 2015, one of these bottles were discovered on the German Island of Amrum by vacationer, Marianne Winkler. It is considered the oldest known message in a bottle.

In 1905, George became the Governor of the Marine Biological Association and between 1939-1945, he was the President of the Association during the tumultuous WWII years. He remained an active and devoted member of the MBA until his death on 31 December 1953.

Huggler, Justin. “World's oldest message in a bottle washes up in Germany after 108 years at sea". The Daily Telegraph, 20 August 2015.