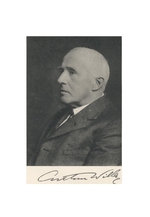 Arthur Willey was born on the 9th of October, 1867 in Scarborough, Yorkshire, England. He was the son of Emma [unknown] and William Willey, a Wesleyan minister.

The 1881 Census, shows Arthur was a student at the Woodhouse Grove School, near Bradford, Yorkshire. Arthur continued his education at University College, London and later, at the Caius College, University of Cambridge under the tutelage of Andrew Balfour. Arthur’s area of interest was natural history/biology/zoology.

In 1894, Arthur went to the Pacific in search of the eggs of the pearly nautilus, which he found along with many other important biological discoveries. Arthur was a lecturer in Biology at Guy's Hospital, in London, England, from 1899-1901; the Director of Colombo Museum from 1902-10; a Professor of Zoology at McGill University from 1909-1932; and a member of the Royal Society of London.

Willey's interest in zoology helped form a friendship between himself and prominent zoologist, George Bidder III. UPEI's Provenance copy of By Southern Shore, published in 1899, was written by Bidder and the inscription inside reads:

Arthur Willey, from his friend the author

In April 1940, Arthur suffered a seizure/stroke which left him partially paralyzed, with loss of sight and mental capacity. He was transferred to the Royal Victoria Hospital in Montreal, where he remained for over two and a half years. His devoted wife was continually at his side until he died on 26 December 1942.