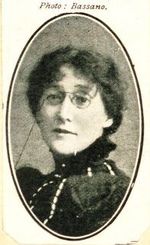 Mary Chavelita Dunne was born on the 14th of December 1859, in Australia. Her father was John J. Dunne, an Irish Catholic army officer, and her mother was Isabel George, a Welsh Protestant. Mary’s childhood was an international experience. She lived in Australia, New Zealand, Chile, Germany and Ireland. At age 14, Mary’s mother passed away, and Mary turned her interests towards nursing. She eventually worked in hospitals in London, England, and New York.

In 1886, Mary returned to Ireland as Charlotte Whyte Melville’s travelling companion and Charlotte’s husband, Henry Peter Higginson, was with them. Mary and Henry fell in love and eloped to Norway the following year. They were married in 1888, but the marriage lasted only one year.

Mary’s time in Norway was a turning point in her literary career. She learned the Norwegian language and devoured the works of Ola Hansson, Knut Hamsun, Henrik Isben, Friedrich Nietzsche, Knut Pedersen and August Strindberg. She became involved in local literary circles and surrounded herself with Norwegian authors and artists. Mary became a translator for many Norwegian authors, including Knut Hamsun and Ola Hansson. The UPEI Provenance Collection book Young Ofeg’s Ditties, by Hansson was translated by George Egerton.

Mary returned to Ireland and her second marriage, on 30 November 1891 to Egerton Tertius Clairmonte, explains her pseudonym. “George” was in honour of her mother, whose maiden name was George, and Egerton was her husband’s first name.

George’s first literary work, Keynotes, was published in 1893. This work was a radical departure from Victorian feminine literature. The book promoted female sexual liberty and fulfilment and broke down barriers of female class and the conventional moral definitions associated with each class. As one would guess, in 1893, this would cause sensational ripples around the literary world. George was pegged as the leader of the “new woman” movement. According to Lisa Hager's paper, “A Community of Women: Women's Agency and Sexuality in George Egerton's Keynotes and Discords”:

Egerton’s New Women constantly push at the edges of the roles Victorian society provides for them as they move toward a space that allows for the expression of their own desires, not the desires that men would grant them. They move towards freely expressing their sexual desires in reciprocal romantic relationships and becoming agents in directing their own lives.

In April 1894, Punch magazine parodied George’s work. She was caricatured as Donna Quixote. In the drawing she sits on a chair with a key raised in her right hand and reading an open book in her left. She sits with legs wide apart and her feet resting on books, one with the name Tolstoi on it. Around her are numerous books and traditionally masculine roles, represented by women (a female soldier, a female knight and a mythical feminine warrior). The only clear male figure is a bearded head with the words “Tyrant Man” on his forehead. Below the picture is a Don Quixote quote, mildly altered: “A world of disorderly notions picked out of books, crowded into his (her) imagination”.

This satirical picture is based on artist Gustave Doré's first plate in the 1863 illustrated edition of Don Quixote.

The parody was obvious to it’s viewers. The key, a traditional phallic symbol, was held in possession by a woman, and the self assertive open-legged stance showed George as sexually available, but still in control of her own sexuality. George Egerton challenged the Victorian moral code. The meek, compliant, sexual subservient Victorian lady, regardless of financial status, was now encouraged to claim their own key and take ownership of their own body and mind.

The marriage between George and Clairmonte did not last. The petition for divorce stated that the Respondent [Clairmonte] had been “guilty of Adultery coupled with desertion of the said Petitioner [G. Egerton] for two years and upwards without reasonable excuse”. The divorce was made final on 18 February 1901.

On 11 July 1901, George married drama critic Reginald Golding Bright. They lived, for many years, at 59 Ridgemount Gardens in London. This relationship might have been the impetus for George trying her hand as a playwright. Only one (His Wife’s Family) of her three plays made it to the stage.

All in all, George Egerton wrote four short story anthologies, two novels, three plays and was the translator of numerous books and theatre scripts.

George did have one son as a result of her second marriage, to Egerton Clairmonte. George Egerton Clairmonte was born on 24 November 1895 at the Rectory Cottage, Chesham, Buckinghamshire. He graduated from Clare College, Cambridge University in 1914 and immediately went to the Royal Military College in Sandhurst. He became a 2nd lieutenant and 1st class machine gun instructor. George went to France on 13 June 1915 and joined the machine gun section of his regiment. He was killed in action by a bullet to the head on 26 September 1915. He was 19 years old. George's Commanding Officer wrote his mother with the following words:

Your son was a very good officer, much liked by his men and absolutely fearless; he seemed to enjoy every moment he was out here. He died fighting gallantly... He will be difficult to replace, and is a real loss to the regiment. He was killed in Bois Hugo...

George Egerton died on 12 August 1945 in Sussex, England. The obituary of “Mrs. Golding Bright” brings to light the essence of her radical literature:

George Egerton's death brings back to mind the so-called 'new woman' school of fiction of the nineties in which the 'problems' of the relations of the sexes for the first time in English literature were put before a somewhat bewildered Victorian public.

The letter that is within UPEI’s Provenance Collection, is in a copy of Young Ofeg’s Ditties, translated by George Egerton, it reads:

The first signature in the book is “Thomas Hutchinson, No.3976”. We can way say, with much certainty, that Thomas Hutchinson is the “Dear Sir” that George Egerton refers to. Thomas regularly wrote authors and cherished their replies, often gluing them directly into the book, such as in Young Ofeg’s Ditties.