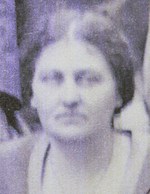 Annie “Clarice" Samson was born on 5 March 1886 in Streatham, London, England. She was the daughter of solicitor Samuel George Claydon Sansom and Annie Freeman.

On 25 September 1906, she married Edward Henry Tuckwell, a stockbroker from her neighbourhood. Together they had eight children: Betty (who died before the age of one), Ruth, Edward, Paul, David, Margaret (Peggy), Esther, and Michael.

Clarice's oldest son, Edward George, studied at Magdalen College, in Oxford, and became a surgeon. During the war, he worked in a field surgical unit in Normandy as a Major. Later, in Burma and Sumatra, he was a Lieutenant-Colonel in charge of a hospital surgical division. In 1964, he became surgeon to the Royal Household and in 1969, he became surgeon for HM Queen Elizabeth II. From 1973-1975, he was Sergeant-Surgeon and appointed Knight Commander of the Royal Victorian Order.

Clarice's youngest son, Michael, was killed in action on 27 April 1943, at the age of twenty-one. He was a pilot with the 458 R.A.A.F. Squadron. On the night of his death, Michael reported back to base that they had discovered, by air, two merchant ships escorted by a destroyer. Michael and his crew never made it back to base after the report. He is buried in the Catania War Cemetery in Sicily.

The Spring of 1943, would have been a difficult season for Clarice and the family. Michael died in April and the following month, on 30 May, Clarice’s husband, Edward Henry Tuckwell, died at the age of 61.

The UPEI Provenance copy of At Large, by Arthur Christopher Benson, has both the signature of A. Clarice Tuckwell, dated June 1909, and her personalized bookplate. The bookplate is a drawing of a birdhouse with eight entrances (possibly representing the number of Clarice's children).

A. Clarice Tuckwell died in 1974 in Surrey, England.

Some information was provided by Richard Somerset, grandson of A. Clarice Tuckwell.

Subscribe to A. Clarice Tuckwell RSS feed
Part of: At Large (2 objects)
At Large