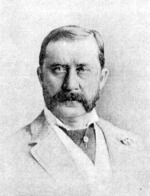 Erastus Wiman was born in Churchville, Upper Canada (present day Ontario), on 21 April 1834. In his early years, he started off as a reporter for the Globe and Mail in Toronto, and eventually moved up as a commercial editor for the paper. His interest in business allowed him to take a position at a local mercantile agency, R.G. Dun & Co., where he became the head of the Ontario branch. He was then promoted to head of the Montreal branch and then promoted again, in 1867, to a partnership in the New York branch, where he managed business within the city.

Always looking for ways to improve his status, he was interested in consolidating local telegraph lines. The Great Northern Western Telegraph Company was the result of his hard work and he became its President. He was also a director of the Western Union Telegraph Company.

Erastus also established a Canadian Club in New York City, at 3 Washington Square, in 1885 and put great emphasis on himself as local entertainer for visitors from Canada. It was a great wish of Erastus’s to open up free trade between Canada and the US. He was a great supporter of Continentalism and was a prolific speaker on the subject. No doubt the topic was widely debated at the Canadian Club.

The year after he formed the Canadian Club, Erastus gave UPEI's Provenance copy of Domesticus: A Tale of the Imperial City by William Allen Butler, to Mary Jane Robinson, the wife of Toronto's former mayor and the fifth Lieutenant Governor of Ontario between the years 1880–1887. The book was published in 1886. The inscription inside reads:

Erastus promoted lacrosse in New York, as well as cricket, and baseball. He created the Staten Island Amusement Company, a three story, 5000 people, arena, which he opened on property to the east of the new ferry terminal. He developed a marina Park along the harbour which he named Erastina. Buffalo Bill and Annie Oakley performed at Erastina.

He was the king of money-making ideas but a run in with the law was to change his fortunes. Erastus was arrested for forgery in 1894. He was found guilty but the sentence was later overturned on appeal. However, many of his creditors sued him and he lost his fortune and most of his property and personal belongings.

Erastus's family, which included his wife Eleanor, maiden name Brown, and seven children: William, Minnie, Martha, Henry, Frank, Louis, and his adopted daughter Ada G. Wonham, supported him and claimed his innocence. Three years after the forgery trial, Erastus became a citizen of the United States, in 1897. He suffered a stroke in 1901 and never recovered to full health. As a result, he died poor, and in relative obscurity on 9 February 1904.