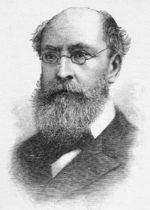 Benjamin Apthorp Gould was born on 27 Sep 1824 in Boston, Massachusetts. He was the eldest of Benjamin Apthorp Gould Sr. and Lucretia Goddard's four children. Benjamin's father was the head master of the Boston Latin School and later, a merchant with the East Indian trade. During his father's long work related absences, Benjamin was left with his aunt, poet Hannah Gould. He had a great respect for her and she was influential in his upbringing.

Benjamin became very interested in his own family history; he compiled and published a genealogy of the Gould family. He later published a second, revised, version of the genealogy.

Benjamin's interests eventually veered in the direction of mathematics and physics, and at age 16, he entered Harvard University. He joined the Harvard Natural History Society and would later claim, “I narrowly escaped being a botanist instead of an astronomer.” He graduated from Harvard in 1844 and immediately took a position as a teacher in the Boston Latin School; where his father once taught. After a year in this position, he felt the need to travel and to further his education.

In July 1845, Benjamin headed to Europe and eventually made his way to Berlin, Germany, where he worked as an assistant in the Berlin observatory. He became friends with the aging author of Kosmos, Alexander von Humboldt. This friendship helped shape Benjamin's career as an Astronomer. He then moved on to Goettingen in Germany, where he studied astronomy under Prof. Carl Riderich Gauss, one of the great mathematical astronomers of all times. In Goettingen, Benjamin received his PhD and was the first American to receive this degree in Astronomy.

In 1848, Benjamin returned to America and took a job in the longitude department of the United States Coast Survey.

The following year he started the Astronomical Journal, a publication that is still in circulation today.

Benjamin accepted the role of director of the Dudley Observatory at Albany, New York, in 1855 and remained there until 1859.

In 1868, he applied his directorial skills to become the first director of the Argentine National Observatory in Cordoba, Argentina. There he, and his team, mapped out the southern hemisphere skies using photometric methods.

In 1885, Benjamin returned to Cambridge, Massachusetts where he continued to study astronomy.

A large area of the Milky Way was given the name The Gould Belt in Benjamin's honour, after he brought academic attention to it. He also has a crater on the Moon named after him.

UPEI's Provenance Collection copy of Indian Legends and other Poems was written by Mary Gardiner Horsford. Benjamin received the book, as a gift, from his Harvard University colleague, Eben Norton Horsford. The book was published in 1855, the same year that Mary died (25 Nov 1855), and the inscribed signature is from her husband, Eben; this can be compared to numerous U.S. passport applications. The inscription reads: