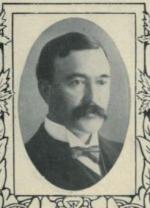 Donald first attended the Uigg Grammar School, where we would start teaching at the age of 14. He continued his education at Prince of Wales College, in Charlottetown and received a first class teaching license. In 1882, he became an articling student with Malcolm McLeod, a barrister in Charlottetown. Between 1885-1887, David attended Dalhousie University in Halifax, Nova Scotia and graduated with a Bachelor of Law.

In 1887, Donald was called to the Bar as an attorney and then a barrister in 1888. Upon his return to PEI, Donald opened a legal practice in Georgetown, which he ran from 1887-1897, before moving back to Charlottetown.

In Donald’s personal life, he married Adelaide Beatrice Louise Owen, from Georgetown, in 1892. They had one daughter and two sons, Beatrice and Arthur, but sadly their other son did not survive past his early childhood. The family was also part of the Presbyterian church.

Once back in Charlottetown, Donald partnered with Alexander Warburton, which only lasted a year, from 1897-1898, since Alexander was called to the bench. Donald then partnered with Edward Williams and Robert McNeill. In 1899, Donald was named Queen’s Counsel and in 1900 became the president of the Law Society of Prince Edward Island.

Donald became involved in politics when he was elected as a Liberal for the 4th Kings in 1893. In 1899, during the government of Donald Farquharson, he was named attorney general. He was not long in the position as he was defeated the next electoral year. In 1900, Donald ran in Queen's East, where he won the majority of votes but the result was declared void and a new election took place in March 1901, where Donald won by an even larger majority.

In October 1904, Donald was appointed as Prince Edward Island’s lieutenant governor, he held this position until May 1910. Later while representing Queens, he was elected into the dominion parliament and sat from 1921-1925.

Sadly on 20 April 1928 in Charlottetown, The Honorable Donald Alexander MacKinnon passed away at the age of 65.