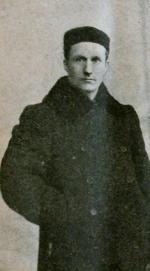 Captain Francis McCullagh was born on 30 April 1874 in Omagh, County Tyrone, Ireland to parents John, a publican, and Bridget McCullagh. He had one brother who emigrated to New Zealand and 3 sisters, two of whom emigrated to Britain and New York. Francis would become a world known war correspondent and author.

Francis first attended school at Christian Brothers’ School in Omagh, from 1882 to 1892. He then attended St. Columb’s College in Derry for the priesthood but would decide on becoming a journalist instead. Francis secured his first position at the Scottish Catholic Observer newspaper in Glasgow, Scotland.

After working in Scotland, Francis began travelling and purchased a ticket to Colombo, Sri Lanka. While there, he became an editor for The Catholic Messenger but not satisfied with staying in one place, Francis travelled to Bangkok, Thailand where he worked with the Siam Free Press. Due to a direct recommendation by the Japanese Chargé d’Affaires, Francis moved to Tokyo, Japan and became the editor of The Japan Times an English language newspaper.

In August 1903, Francis moved to Port Arthur, in Russia to work at the newspaper Novi Krai. In the next year, the war between Russia and Japan broke out and this was when Francis first became known around the world. He was based on a British ship “Colombia'' when Japan sank the Russian fleet, he sent his first person account to the New York Herald, and his correspondence was seen around the world. In 1906, after the war, Francis published his first book titled, With the Cossacks: Being the Story of an Irishman Who Rode With the Cossacks Throughout the Russo-Japanese War.

After his first experience in the Russo-Japanese war, Francis went on to observe and write about the Portuguese Revolution of 1910, the Italian venture into Tripoli in 1911, and World War I in 1914. During WWI, Francis applied to join the Royal Worcestershire Regiment and he was accepted on 25 November 1914, he would later transfer to the Royal Irish Fusiliers. Francis was commissioned as a lieutenant on 8 December 1914 but by March 1918, he resigned from the military due to poor health.

Francis was not one to settle in one place for every long, by 1923, he was expelled by the Soviet Government and he would recount his time during the Bolshevik Revolution in his book, The Bolshevik Persecution of Christianity, which was published a year later in 1924. Francis travelled around the world and eventually found himself in Mexico in 1927, during the anti-Catholic persecution. He wrote the book, Red Mexico: A Reign of Terror in America, which was published in 1928. In the summer of 1936, he travelled to Spain to write about the Spanish civil war. Later in 1937, he wrote the book In Franco's Spain: Being the Experiences of an Irish War Correspondent During the Great Civil War. After the war he moved to New York, USA, where he settled into a comfortable life.

On 25 November 1956, in White Plains, New York, Captain Francis McCullagh passed away at the age of 82.

In UPEI’s Provenance Collection, the book, The Bolshevik Persecution of Christianity, by Captain Francis McCullagh has an inscription addressed to Bishop Francis Kelley. Francis McCullagh Oklahoma City, Oklahoma July 6th 1927 “sleep after toyle, port after stormie seas, ease after warre, death after lifes, does greatly please” - And so does this stay in Bishop Kelley’s house after a month in Mexico.