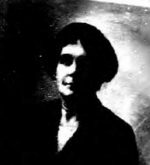 Carolyn Wheeler was born on 8 August 1861 in New York State. She was the daughter of George Minor Wheeler and Marion (Maria) Bailey Lang. They were married in Boston on 14 May 1853.

Gustav wrote for many newspapers and magazines, including The Musical Review, The New York Sun, The Century, Scribner’s The Forum, and North American Review. He was also the author of many books, mostly focusing on classical music and great composers.

In 1905 Carolyn and Gustav were living in Manhattan NY. By this time they had five children: George Minor Wheeler (21), Beatrice (18), Hildegarde (16), Virginia (14), and Carolyn (12). They also had two domestic servants: Ellen Healy and Mary Flannigan.

Tragically, Gustav died as a result of a boat accident on 27 July 1918, in Islip NY. In her book, My Spiritual Pilgrimage Carolyn wrote about the incident:

It was one of those rare days in summer, a gentle breeze blowing and a clear sky overhead. My husband said, “Good-bye, I’m going out in my sail-boat for a quick little sail.” ...He never came back… The driver of an army hydroplane misjudged his landing and cut across my husband’s boat. It was instantaneous. It was all so sudden and unexpected. For months afterwards I was like a sleep-walker, moving but not seeing or hearing. Then I realized that in order to live I must find some kind of help; but where?

After much soul searching, and faith seeking during a vacation in Europe, Carolyn converted to Catholicism after her husband’s death. She took on the name Therese as her Catholic name, becoming Carolyne Therese Kobbé.

After her initial trip to Europe Carolyn returned often. In 1923 Carolyn applied for a passport to go to Europe with her 13 year old grand-daughter, Carol Stevenson, with the purpose of “education of grandchild”.

Carolyne wrote the book, My Spiritual Pilgrimage: An Attempt to Help Those Who Want to Find Peace and Happiness in this Changing World, which was published in 1935. The book highlighted her trips to Europe and her redemption through her Catholic faith. UPEI’s Provenance copy of the book includes the following inscription:

Bishop Francis Kelley was the Bishop of Oklahoma City, and was born in Vernon River, Prince Edward Island. A significant portion of UPEI’s provenance collection were books signed by authors to Bishop Kelley.