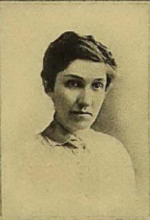 Grace was born in January 1883. She was the daughter of Rudolph O. Goodrich (son of Wickliffe Goodrich and Julia Pierce) and Ella Stewart (daughter of Freeman Stewart and Helen Conant). Grace had two younger siblings, Helen Hazel and Lowell Pierce.

In 1905 Grace (22) and her sister Helen (16) were working full time as domestic servants, but they both had grander plans. Grace enrolled in Ripon College and by 1907 she was teaching Latin and English. In 1909 she went to Rome to study at the American School of Classical Study. Upon her return she went to the University of Wisconsin, where she received her PhD in 1913. She then took a position at Ripon College (where her education had begun) as a Professor of Classics.

Education was a family affair. Grace’s sister Helen worked as a public school teacher, and her brother Lowell was the Superintendent of Public Schools in Fond du Lac.

Of the three siblings, Lowell was the only one to marry and have a child. Lowell’s wife, Jane B. Jones, also dedicated her life to education. After the death of Lowell in 1949, she became a “housemother” of Ripon College, living as “Head Resident” of Evans Hall. Lowell and Jane’s only child, William Pierce, was born in 1919.

Throughout her career Grace remained living with her parents. By the 1920 Census Grace’s mother had passed away, and Grace and her sister Hazel continued to live at home with their widowed father on Lincoln Street. Grace’s brother Lowell, and his family, lived just around the corner on Thorn Street in Ripon. They can all be found on the same page in the 1920 U.S. Federal Census.

Ripon College has a formidable reputation. The actor Spencer Tracy was a student at Ripon College when Grace taught there, but there is no indication that he took one of her classes. In the 1960’s, Harrison Ford would also attend Ripon College, although he flunked out.

By 1930 only Grace and her father remained living on Lincoln Street in Ripon, Wisconsin. Helen had moved to the neighbouring town of Fond du Lac, to continue her teaching career.

In 1933, Grace became the Dean of Women at Ripon College and she would remain in that position until her death in 1939. According to the Wisconsin Alumnus, Grace died on 19 September 1939, at the age of 56, after a year long illness.

Today Ripon College remembers Grace in the form of an award. The Grace Gertrude Goodwin 1906 Classics Award and Scholarship is a cash award given to the graduating senior who has shown distinction in Classical Studies. The scholarship for tuition is given to the sophomore and junior students who show outstanding aptitude for classical languages.

Grace was about 12 years old when she received The Arabian Nights from her papa at Christmas. We are unsure whether ‘papa’ was Grace’s father, Rudoph, or either of her grandfathers, Wickliffe Goodrich or Freeman Stewart. All three of these men lived in Wisconsin. The connection to St. Louis Missouri remains unknown.