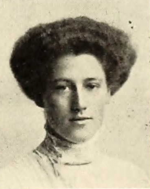 Elizabeth Ewing Bryan was born on 21 February 1887, in Washington D.C.

Her father, Wilhelmus (Bill) Bogart Bryan, was a newspaper journalist, writing for the Washington Post and the Washington Star. Her mother, Emily Black Pentland, was a writer.

In 1900 Elizabeth, her parents and two younger brothers, lived with Elizabeth’s mother’s parents, Andrew and Elizabeth E. Pentland. It appears that Elizabeth was named after her maternal grandmother.

Elizabeth attended Smith College, Northampton, Massachusetts. In the 1909 Smith College Yearbook Elizabeth was listed as a student, with a home address of 1330 Eighteenth Street, Washington D.C.

Elizabeth travelled to far distant lands. In June 1916 she travelled to Peru aboard the ship “Canamares”. Her passport for this trip describes her as 5 foot 5, with brown hair, green eyes, with a straight nose and light complexion.

On 18 October 1919 Elizabeth boarded the ship Venezuela in San Francisco. Her passport application listed that she planned to visit Japan, Korea, China, Hong Kong, and the Philippines. She left Shanghai, China, and returned to Victoria B.C. in January 1920, aboard the Empress of Russia.

Her signature in both passport documents confirm that we have the right Elizabeth, who signed her copy of Leo Tolstoy’s “Hadji Murad”.

By 1920 Elizabeth was working as a teacher and by 1930 she was a public school Principal in Washington D.C.

At the end of June, 1929, Elizabeth travelled to Honolulu, Hawaii and remained there for the summer months. She returned to San Francisco on 3 September, 1929.

In 1930 Elizabeth was living with her parents. Her father was 75 and her mother was 68. Living with the three of them was Jane Newman, who had been hired by the family to be a personal nurse.

Elizabeth married William Deluce Barnes, a widow, on Saturday January 1st, 1938, at the age of 50. They were married in Elizabeth’s home, at noon, on Eighteenth Street in Washington D.C.

Their wedding was announced in the Hartford Courant on 31 December 1937. The article tells us that Elizabeth’s brother (W.B.) officiated the wedding; he was, at the time, a student pastor at Princeton University.

Elizabeth and William lived in Hartford CT where William worked as the executive secretary for the Connecticut Prison Association (CPA). He had worked, earlier, as a Congregational Minister and a Professor of Social Ethics at Hartford Seminary. As executive secretary of the CPA, he oversaw all State probation officers, looked after all fund-raising efforts for the Connecticut Prison system, and constantly worked on improving prison living conditions.

The website Ancient Faces indicates that Elizabeth died on 15 August 1867, in Washington D.C., but offers no reference to the date is given. If it is the case (which needs verification), Elizabeth lived to be 80 years old.

Fifty Years of Princeton, ‘77: A Fifty Four Year Record Of The Class Of 1877 Of Princeton College. Author: Henry Fairfield Osborn, 1927.