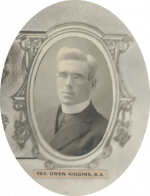 Owen was first educated at the Brookvale school, he was then accepted into Prince of Wales College and graduated with a teaching license. After graduation, he would teach in Wellington for a few years before attending St. Dunstan’s University and graduating with a degree in 1910.

After St. Dunstan’s, Owen decided to enter into the Priesthood and went to study Theology at the Grand Seminary in Quebec. After four years, he was ordained on 14 July 1914, in Kelly’s Cross.

Owen then became an instructor at St. Dunstan’s and taught from 1914-1923. In 1923, he was appointed to Georgetown and Montague parishes where he stayed until retirement in 1960.

Sadly on 6 March 1961, Reverend Owen Kiggins passed away at the Sacred Heart Home in Charlottetown. His funeral was held at St. James Church in Georgetown on 9 March 1961.

In UPEI’s Provenance Collection, the book, A history of English literature for secondary schools by J. Logie Robertson has the signature “Owen Kiggins SDC 1915”.