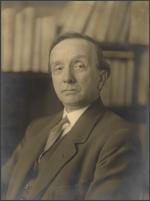 Arthur St. John Adcock was born on 17 January 1864, in London, to parents William and Eliza Adcock. A. St. John was the second oldest child of the six Adcock siblings, which included William, Edward, Samuel, John, Fanny, and Frederick.

Even though A. St. John was most known for discovering the poet W.H. Davies, he started work as a law office clerk in London. He would not being writing full time until 1893.

In 1887, A. St. John married Marion Louisa Taylor. They had two children, daughters Marion St. John Webb (1888-1930) and Almey. Daughter Marion was also a published poet and author. She married amateur actor and playwright Sidney Hastings Webb on 11 May 1912.

When A. St. John, started writing he was also working as an assistant editor for a trade journal part time. He was very persistent when trying to publish his writing and his first published novel was An Unfinished Martyrdom in 1894.

A St. John was also known for being the editor of the magazine, The Bookman from publishers Hodder & Stoughton. The magazine, published monthly, contained reviews, illustrations, and advertising.

In 1920, A. St. John wrote an introduction to a collection of poetry, The Calling of the Sea by good friend William Hope Hodgson. The collection was published after W.H. Hodgson’s passing by the actions of his wife.

Sadly, on 2 May 1930, A. St. John’s daughter Marion passed away in London, and it would be a month later on 9 June 1930, that Arthur St. John Adcock passed away in Richmond Surrey.

In 1974, his daughter Almey gave the Bodleian Library papers of A. St. John; some of the records include correspondence, manuscripts, notebooks, an album from his wife Marion with photographs, and more.

In UPEI’s Provenance collection the book, Men of Letters by Dixon Scott has the inscription Captain Cyrus MacMillan with kind regards from A St. John Adcock 1917 and in Cyrus MacMillan’s writing Editor “Bookman” is written below.