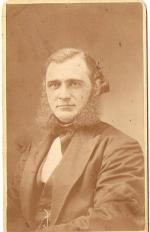 Dr. Ephraim Epstein was born in Babruysk Russia in March 1829 to an affluent Jewish family. At the age of seventeen his family arranged his marriage to his cousin (name unknown). They married in 1846 and had a daughter, Sarah, not long afterwards.

In pursuit of an education Ephraim set off to America, promising his family that he would send for them when he found success in the United States. He arrived in New York on 11 March 1850. While in America, he wrestled with theology and ultimately converted from Judaism to Christianity. With this news his family cut him off and declared him dead.

In New York Ephraim began a 3 year medical degree from the Columbia University College of Physicians and Surgeons, and graduated in 1859. Ephraim also studied at Andover Theological Seminary in Massachusetts. In the 1856 Andover Theological Seminary Catalog it was noted that Ephraim was “preparing for a mission among the Jews of Palestine”. After this he traveled to Kingston, Ontario, Canada to further his medical studies (likely at Queens College Medical School), and to become an ordained Presbyterian minister. He planned to put medicine and his faith together and become a medical missionary. After the end of his training in Canada, Ephraim traveled to Turkey for Missionary work among Sephardic Jews.

His conversion back to Judaism proved insincere and he quietly held on to his overwhelming faith that Jesus was the Jewish Messiah. However, only after his mother’s death would Ephraim openly announce his true convictions.

Eventually Ephraim's first marriage fell apart and they divorced. Around this time Ephraim moved to Austria to work as a doctor in the Vienna General Hospital. In 1866 he joined the Austrian Imperial Navy and became a ships surgeon. He took part in the famous battle of Lissa, which was fought and won within 2 hours.

In 1867 Ephraim moved back to America and set up a practice in Leavenworth, Kansas.

At the age of 41, Ephraim fell in love and married German born music teacher, Helena Greyer, in April 1873. We have been able to identify eight of their children : William, Freeda, Julia, Zelda, Naomi, Leo G., George and Ruth.

Their first child, William, was born in 1874. Four years later little William came down with a fever and was inadvertently prescribed the wrong medicine. As a result, he died. Ephraim felt that he was to blame the for the death of his son. He was so crushed by the devastating mistake that he felt that he could no longer practice medicine and gave up his medical career.

In his time away from medicine, Ephraim pursued a few different careers. He briefly taught Hebrew and Biblical scripture at Heidelberg college. This only lasted for roughly a year before he moved on, possibly due to his outspoken controversial religious views. By being a Messianic Jew he wasn’t fully accepted by either Judaism or Christianity.

Ephraim worked as a Baptist preacher in Yankton South Dakota, at which time he became involved in opening a new university where he hoped people would be allowed to speak their minds. He became the founding president of this new school, Dakota University (now the University of South Dakota), which opened in 1882. His starting salary was $700 annually, and he presided as president, as well as professor, administrator, book seller and record-keeper. Unfortunately, the following year the Board of Regents campaigned for a different president and Ephraim lost his post.

In 1887, Ephraim finally reapplied for his medical licence in West Virginia and continued on this career path until he reached his 70’s. At this time, Ephraim was traveling to his patients with horse and cart, and it was beginning to take a physical toll on his body, leaving him exhausted after a days work. However, he still had to make a living. Although his 2 oldest children were in the workforce, he still had 4 children dependent on him.

In 1899 Ephraim received an opportunity to work in Chicago as an editor, and contributor, for the American Journal of Clinical Medicine. The family promptly moved to Ravenswood, Chicago, Illinois. He also wrote a book, The Construction of the Tabernacle, in 1911. Ephraim remained as editor of the American Journal of Clinical Medicine until he passed away on January 26, 1913.

The UPEI Provenance book, The Number Counted, includes a personal library bookplate: Dr. Eph. Epstein's Library. Current No.481. Topical No.42. The marginalia inside the book include both English and Hebrew text and is very likely Ephraim's own markings. The book also includes the signature of Eber C. Byam and a bookplate announcing that the item was bequeathed to St. Dunstan's College Library from Bishop Kelley.

The Extraordinary Dr. Epstein. Published by the ChiswickCalendar. YouTube, 2016. https://www.youtube.com/watch?v=YCdg1ZVPMUc