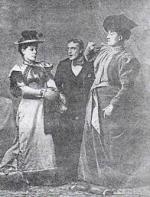 Cecil F. Crofton was born Frederick William Martin on 10 November 1859 in Peterborough, Northamptonshire, England, United Kingdom to GilsonMartin, a Land Agent for the Duke of Devonshire, and Elizabeth Martin.