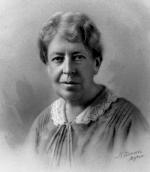 The majority of Mary’s childhood was spent in Buffalo, New York. Until, in 1881, at the age of seventeen, Mary’s family uprooted once again and moved to Newton, Massachusetts.

In 1882, Mary attended Smith College in the hopes to earn her Bachelor of Arts in Classics and Philosophy. However, tragedy struck Mary’s life when her sister, Maud, passed away. Mary took the following year off to tutor her other siblings and take care of her mother whose mental and physical health was deteriorating. While she was home, she received private lessons in Greek. She returned to Smith College, in 1884, to complete her degree.

In 1886, while on a family trip to Leipzig, Mary had the opportunity to travel and study in Italy and Greece. She returned to the United States in 1887, and shortly thereafter, became an instructor in Greek at Wellesley College.

In 1890, Wellesley College was interested in developing a psychology department with Mary being the lead instructor. However, she needed to get more training in order to take on this position.

Mary chose to attend seminars at Harvard, but was met with resistance from the University. After lengthy petitions from both her father and Wellesley College, Mary was finally admitted into the seminars, but she was only accepted under the pretense that no precedent for co-education was set. Mary was only able to attend as a faculty member of another college seeking post-graduate instruction. Mary’s co-students were no help either. The other four students who were in the class, previous to Mary acceptance, quickly dropped the seminars in protest of a woman attending Harvard. This would mark the beginning of the controversy surrounding Mary and her struggle to gain more education.

In 1891, Mary became the instructor of Wellesley’s psychology department. During this year, Mary would also be responsible for having one of the first psychology labs in the United States.

Mary returned to Harvard as a visiting faculty member to study under Hugo Münsterburg, in 1892.

In 1894, Mary had impressed Hugo so greatly that he had petitioned the president of Harvard at the time, Charles Eliot, to formally enroll Mary into the Ph.D. program as, according to her biography on the American Psychology Association’s website, “she was the strongest student in his laboratory since he had arrived at Harvard.” His petition was denied on the grounds that Harvard did not accept women into any program. However, this did not stop Hugo from continuing to pursue a means for Mary to receive academic recognition.

Six prominent psychology professors at Harvard, in 1895, held an unsanctioned doctoral examination in which they unanimously suggested that Mary should be awarded a doctoral degree. This too was denied.

In 1902, Mary and three other women who had done postgraduate work at Harvard were offered Ph.D.’s from Radcliffe, Harvard’s women’s college. She denied this offer because she felt as though the degree did not pertain to the work that she was doing. Efforts to grant Mary her rightfully deserved Ph.D. continue to this day as Harvard still fails to recognize her academic successes.

Despite all of this controversy, Mary continued excelling within her field.

In 1895, she became an Associate Professor of psychology and philosophy at Wellesley.

In 1896, Mary published an article on the theory of association which is speculated to have been her doctoral dissertation. The article focused on paired-association technique, which examined individuals who learned pairs of items to the point that one item would trigger the recall of the other.

In 1898, Mary became a full-time Professor at Wellesley, where she developed the field of self-psychology. Along with her work on paired-association and self-psychology, she also developed groundbreaking research on dreams.

In 1927, according to New York passenger lists, Mary visited France for Christmas. She travelled aboard the ship President Harding. The following year she was elected as an honorary membership in the British Psychological Association.

Throughout her career, Mary published four books and hundreds of articles. She was considered a world-renowned scientist.

Mary Whiton Calkins died of cancer on 26 February 1929. She shares a headstone with her siblings at Mount Auburn Cemetery in Cambridge, Mass.

The UPEI Provenance collection, includes one book that belonged to Mary Whiton Calkins titled Lectures and Essays by W. K. Clifford. It was published in 1879 and has Mary’s bookplate and signature inside.