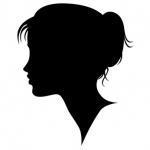 Bertha Jane Hunt was born on 11 July 1867 in Summerside, Prince Edward Island to Richard, a merchant, and Mary E. Hunt. She was the third of seven children: William, Mary, Bertha, Edward, Louis, Flora, & Ethel. The Hunt family were members of the Church of England.

In 1888, Bertha married James Black Hegan, a civil engineer, who later became the District Engineer of the Department of Public Works of PEI, and an Engineer of the Federal Marine Department. Together they had five children: Richard, Janet, John, Louis, and Margaret. The family remained on Prince Edward Island, settling in Charlottetown.

Bertha was an active member of the congregation at St. Peter’s Cathedral for many years until her health prevented her from participating as much. Her family was also very involved with the church, her youngest daughter Margaret, married the Priest Incumbent, Reverend Canon E.M. Malone in 1936.

Although Bertha was confined to her home for the last several years of her life, she remained “cheerful and uncomplaining”, according to the Guardian. She passed away on 3 April 1952 at the age of 84. She lies buried with her husband at St. Peter’s Anglican Cemetery in Charlottetown.

The UPEI Provenance Collection’s copy of Mabel Grant: A Highland Story by Randall H. Ballantyne, has an inscription which reads “Bertie J. Hunt Love N.F. Lee Christmas 1877”, implying Bertha received the book as a Christmas gift when she was ten years old.