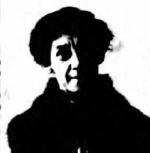 Annie Stirling Chalmers, sometimes known as Anne, was born on 7 June 1867 in New Jersey City to Scottish-born parents, William and Jane Chalmers. She was the fifth out of their six children, with an older sister Jane, older brothers James, Thomas and John, and a younger sister Mary.

In 1880, the family relocated to Middletown, Butler, Ohio but by 1900, they had returned to Camden, New Jersey.

In 1910, Annie and her younger sister Mary were boarders in James J. Gibb’s home in Newark, Essex County, New Jersey. They were workers in an asbestos factory, though by 1920 Annie was living in Richmond, New York, so this was not a long-term position.

On 17 October 1922, at age 55, Annie applied for a passport with Mary as her witness. Her application indicates that she was unmarried and living in New York City at the time. The process was successful and she sailed on the S.S. Cameronia to Britain on 4 November 1922, for a vacation with her sister. On returning, they left from Southampton on the S.S. Orbita on December 1, arriving in New York City on December 11.

Annie remained in Richmond New York until her death on 25 September 1930. According to the 1930 Census, she was single, unemployed, and had had no formal education.

Annie was buried at Harleigh Cemetery in Camden, New Jersey.

UPEI’s Provenance Collection’s copy of The Literary Guillotine, has been signed three times by Annie: first being her initials, “A.S.C. May 1908”, in handwriting: “Annie Stirling Chalmers May 1908”, along with an inscription “Jim, from Annie July - 1908”. This “Jim” could be referring to James J. Gibb, the man whose home she boarded in, in 1910.