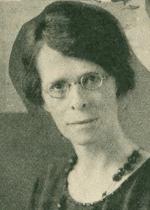 Margaret was born in Cornwall Ontario, around 1872. She was the only daughter, amongst six sons, to Alexander MacLean and Sarah Smith. Of Margaret’s six brothers, three were older, John S., Donald, and Robert, and three were younger, Alexander, Thomas, and Henry Sandfield MacLean.

In 1904, after the death of her mother, Margaret’s father took a government job as Canada’s commercial agent to Japan. Margaret accompanied her father to Japan, where her love for travel was cemented. The following year she travelled to China for four weeks and wrote a book about her experiences. The book was originally titled, Chinese Ladies at Home, and later changed to The Wise Traveller. Her writing was personable and humorous. She attended weddings and birthday feasts, ate sea slugs and rode in a Chinese wheelbarrow. She experienced the culture at its core, climbing pagodas and narrowly escaping a riot in Shanghai. Her sense of adventure was always at hand, and continued throughout her life.

Margaret continued her wanderings and, after her father died in Shanghai China, in 1908, she took a world tour, twice.

Margaret’s education was rich with world experiences and first hand knowledge of far-away cultures, but formally she only completed five years of schooling as a child. She never went to high school, never went to college and, yet, she excelled as an educator.

Margaret settled back to Canada in Toronto and spent many hours wandering the newly opened Royal Ontario Museum, familiarizing herself with the complete collection. Seeing that attendance was failing, and nothing was being done about it, Margaret approached the Museum director, Charles Trick Currelly, to see if she could become an official museum guide. The answer was a prompt, ‘no’, there was no such position available. They did, however, give her permission to study within the museum, with reiterated addendum that even if they did, eventually, allow museum guides, the position would be unofficial and unpaid.

Margaret threw herself into study. She spent many hours at the public Library and in the Museum, “where she studied with as much diligence as a university student whose finals are but due in one week.” (Pringle, 68) Her diligence, and her detailed understanding of the complete Museum collection, was phenomenal.

Undeterred, and to the disapproval of the Museum directors, Margaret began hosting her own unofficial tours and lectures around the Museum collection. She was especially devoted to educating children about the great treasures held within the museum walls. Margaret began to self-promote her museum tours and lectures with her own brochures and calling cards, which she sent to local schools, clubs and institutions. The popularity of these tours kept expanding and the museum was seemingly forced to evolve their original stance and allow Margaret to lecture to outside parties for a fee, knowing that she was still not employed by the museum under an official capacity. Also any lectures given around the Science portion of the museum had to have the permission of the Museum Director. Her work as a freelance museum guide continued to thrive and in her first winter of unofficial, unpaid, lectures she had over six hundred attendees.

It became evident, then, to the Board of Trustees, that this was a great way to improve museum attendance, and they finally hired her, with a salary, in February 1919. She would lecture three times a week, and organizations and schools could arrange special lectures with Margaret, the Museum’s Official Guide. On Saturdays, she held a story hour for children and a lecture for adults. After a year in this position, even the Science Directors allowed her full access to their collections.

In her [Ms. MacLean’s] first year, 1919, she lectured on twenty-one different subjects to 9128 people as well as giving thirty-one lectures outside museum hours, writing four magazine articles and producing forty press notices about the museum. (p.184).

George Crofts, a collector of Chinese antiquities, wrote to Margaret on 27 March 1923. His letter highlights Margaret’s gift of teaching:

Your letters, like yourself, are intensely interesting, because they contain a mass of information clearly illustrating the great ability which you possess in connection with the work in the Museum. It affords me great pleasure to congratulate you on your good taste and executive ability. I have not mentioned this before, but I had the pleasure of listening, unknown to your goodself, to two of your lectures, and was really surprised at the depth of your knowledge and clearness of your explanations. I rather envied you the faculty and fullness of your expressions which conveyed so much in a very few words to your silent listeners. Thanks muchly for the pleasure. (Museum Makers, p.49).

The years of Margaret’s complicated relationship with the Royal Ontario Museum corresponded with WWI. Margaret’s family would be devastated by the impact. On 17 January 1917, Margaret’s youngest brother, Henry, was killed in action, in the trenches at Angres France.

Margaret’s involvement with the museum continued until 1923, when she was forced to retire for health reasons. She died on 30 May 1931 at the Hospital for Incurables in Toronto. There is a debate to her cause of death being either tuberculosis and/or heart disease.

The UPEI Provenance Collection is in possession of one of Margaret’s personal books, Human Bullets: A Soldier’s Story of Port Arthur, by Tadayoshi Sakurai. On the cover she writes, “Margaret MacLean. Kindly return this book as I value it”. She writes the same note on the inside cover. The book is full of her hand written musings, including her thoughts on viewing Japanese flags “shot into tatters, grimmy with the smoke of battle- looking pathetic in the extreme, yet on seeing them I shouted ‘Bonzai!’”

She writes about the Crown Prince’s unpopular decision to remain monogamous to his wife: “no Emperor had ever been the son of the first wife”.

And she muses on owning a photo of General Fock, within a group of war-prisoners, and how he was in a duel with General Smirnoff in Russia, “in which one was killed”. (It was Smirnoff that did not survive).

Margaret’s signature, found on the Form 30A Ocean Arrivals, dated 25 June 1921, matches the signature we have in this book. The form indicates that she was returning to Canada from London, England, aboard the Corsican.

Margaret was a leader in Museum education, and an inspiring woman of initiative. In essence, she created her own job, made herself a living treasure to the Museum, and fulfilled the needs of the job so well that the Royal Ontario Museum has held onto the position to this day.

Dickenson, Lovat. The Museum Makers. The Story of the Royal Ontario Museum. ROM: The Bryant Press, 1986.

Pringle, Gertrude. “How Margaret MacLean Won A Niche for Herself in a Museum, by Energy, Initiative and Persistence” in Women and their Work section, Maclean’s Magazine, May 15, 1923, 68.

“Understanding Inclusion One Museum Director at a Time”, The Incluseum, accessed May 3, 2017.

Zankowicz, Katherine. In Her Hands: Women’s Education Work at the Royal Ontario Museum, the Canadian National Exhibition, and the Art Gallery of Toronto, 1900s-1950s. PhD, diss., University of Toronto, 2014.