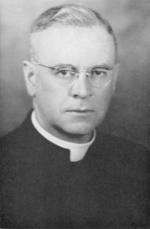 After his education at the Vernon River School and the Queen Square School in Charlottetown, Ray attended Saint Dunstan's University. After graduation, he attended St. Augustine's Seminary in Toronto, Ontario. In 1923, he was ordained as a priest at St. Dunstan's Basilica in Charlottetown, Prince Edward Island.

Shortly after his ordination, Ray became part of the faculty of St. Dunstan's University as a Professor of English. In 1943, he became the Rector of the University and held that post for thirteen years.

Ray was a veteran of WWI and was an Air Force Chaplain, stationed in Charlottetown, during WWII.

After the war, in 1948, Raymond was appointed as Domestic Prelate (now known as Honorary Prelate) by Pope Pius XII. His investment for this honour took place on Sunday, April 4th. It was noted in the 10 April 1948 edition of The Guardian:

On Sunday evening, in the chapel of St. Dunstan's College, the Rector Rt. Rev. Raymond V. MacKenzie Litt. D., DP., was formally invested as a Domestic Prelate by His Excellency Most Rev. James Boyle D.D., Bishop of Charlottetown... The Bishop explained the significance of the prelacy, and paid high tribute to the newly-invested prelate. Msgr. MacKenzie, in a brief reply, expressed his appreciation of the honour confired on him.

Raymond died of heart failure at the Charlottetown hospital on 26 April 1963 and was buried in the Priests' Plot in his native Parish of Vernon River.

W.B. MacKenzie would have been Ray's brother, Wilbert Basil MacKenzie, who was also ordained as a priest in St. Dunstan's Basilica. He took up priesthood in the Archdiocese of Vancouver and eventually became a hard-working missionary throughout central British Columbia. In 1941, Wilbert took a trip, from B.C., to Prince Edward Island to visit his family, including his brother Ray.

The Provenance Collection also includes the book Selected Essays from Sainte-Beuve edited by John R. Effinger. The book appears to have been used by both brothers during their first years at St. Dunstan's College. Wilbert attended at the beginning of 1912 and Ray started in 1915. The inscription reads: